“What’s refreshing to me about the Strokes is that, in a musical climate where even the dirtiest garage bands can create the illusion of million-dollar studio techniques through sound filters on mom’s Packard-Bell, the Strokes prefer to rock in the classic vein: no laser sounds, no ethereal reverb, no pre-programmed Aphex beats. Their influences are so firmly rooted in the post-punk tradition that it’s as if the last two decades had never occurred.”

The man who produced that album, Gordon Raphael has spent four decades working with musicians, performers and songwriters to create genre-defining sounds. His work with The Strokes, Regina Spektor and The Libertines has made him one of the world’s most sought-after music producers.

Raphael produced The Strokes’ debut EP The Modern Age, as well as their first two albums Is This It and Room on Fire, from his basement studio in NYC.

Gordon now resides in the UK and his new book, ‘The World Is Going To Love This – Up From The Basement With The Strokes’ is published by Wordville in July.

We are delighted to welcome Gordon Raphael to The CAT Club. Happy Trails. 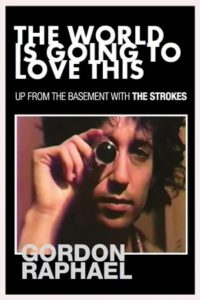